I just read a super interesting article on Urban Omnibus -- Living Lofts: The Evolution of the Cast Iron District. This is one of those articles that I want to copy and paste in its entirety. Briefly: It talks about how SoHo's buildings have been used over time, and what effects they have had on the communities, laws, and overall transformation of the neighborhood throughout history. 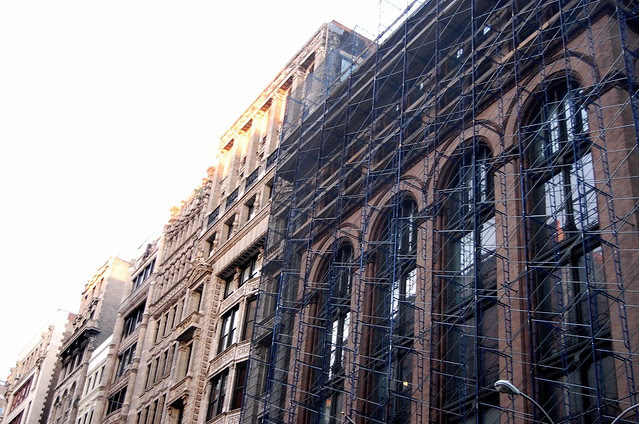 This is one of my favorite parts, on artist lofts in the 1960s:

Many lofts remained empty for quite some time until artists began moving in to what had become a desolate, dirty, and dangerous area. These new residents lived illegally in raw industrial lofts they made habitable by installing bathrooms and taping plastic sheets over the windows to keep out the cold. Living conditions were often uncomfortable at best. The area was empty at night, the crime rate was high, and the streets were filthy, as there was no regular trash pickup. There were no schools or clinics, and no grocery stores or restaurants, save for a couple of diners open only for breakfast and lunch to serve the factory workers. It was a kind of no-man’s-land that even taxi drivers had trouble navigating. On the other hand, the small population and isolation from infrastructure and resources created a tight-knit community of residents. Everyone knew each other by name and looked after one other. Because there were so few public services, the community provided for themselves, opening restaurants for locals and forming community playgroups where neighbors often paid for goods and services with their time and involvement instead of cash.

After 1971, it was deemed legal for artists to live in the smaller lofts in SoHo (in two specific zones), which brought up an interesting set of criteria on what makes one an artist (awesome when law and philosophy meet, no?). It sounds like artists had to fill these out when applying to live in the neighborhood. When an artist applied to live in SoHo, their "commitment to [their] creative work" would be assessed.

1. A description of the artist’s work.

2. A description of the artist’s need for space.

3. A biographical sketch including data the artist feels is pertinent; education, professional training, public exhibitions or performances, reviews, or grants.

4. Other data. If the artist does not feel properly represented by 1, 2, or 3, above, he can: a) present documentation of his work in the form of slides, photographs or other data which will back up his commitment and space needs—but not his aesthetics, or b) ask a few members of the Committee to visit his studio or working space to discuss his situation.

5. The names of two people who are familiar with the artist’s work and who can testify to his commitment and his need for loft space.

It doesn't sound like this law has formally disappeared: "Every non-artist who moves into SoHo today could theoretically be told to move out unless he or she can prove artistic legitimacy, but the probability of that aspect of the law being enforced is low."

There were tugs of war between artist tenants and landlords, and various social shifts that over a couple of decades have turned SoHo into what it is today. The article glosses over the minutiae of how these "economic and social" shifts happened, which I'd be really interested to read more about. This paragraph should feel more familiar to anybody who's been to the area recently:

The change in the socio-economic makeup of SoHo residents brought with it commercial development. Art galleries began to move out of the neighborhood in the 1980s and 1990s, mostly to Chelsea where rents were more reasonable, and were replaced by high-end boutiques, restaurants, bars, and nightclubs. Nightlife destinations brought unwelcome street noise, and the SoHo Alliance fought hard against the issuing of new liquor licenses.

So good. Heading over to the writer's more permanent home, SoHo Memory Project, to see if I can find out more.

Posted by Johanna Beyenbach at 12:43

Johanna Beyenbach
This blog is kind of a mixed bag (and a time capsule, by now).